Gabriel Cornelis de Jongh was the son of the renowned artist Tinus. He was born on 6th April 1913 in Amsterdam, Holland and arrived in Cape Town as a boy of 9 years old in 1922. Initially they lived in a cottage in Fishhoek, for six months and from here he accompanied his father on his extensive weekend hikes throughout the Cape Peninsula in his quest for painting subjects.

Gabriel was soon introduced to the rigors of the life of a landscape artist. Utilising public transport closest to their destination, they walked the remaining distance carrying the heavy painting gear and camping equipment. His father, Tinus had taught him to observe and mentally record facets of the landscape with the clarity and precision of a camera. He had instilled in him the principle that so characterises their work, that it is light, reflected light and cast shadow that create form and dimension. 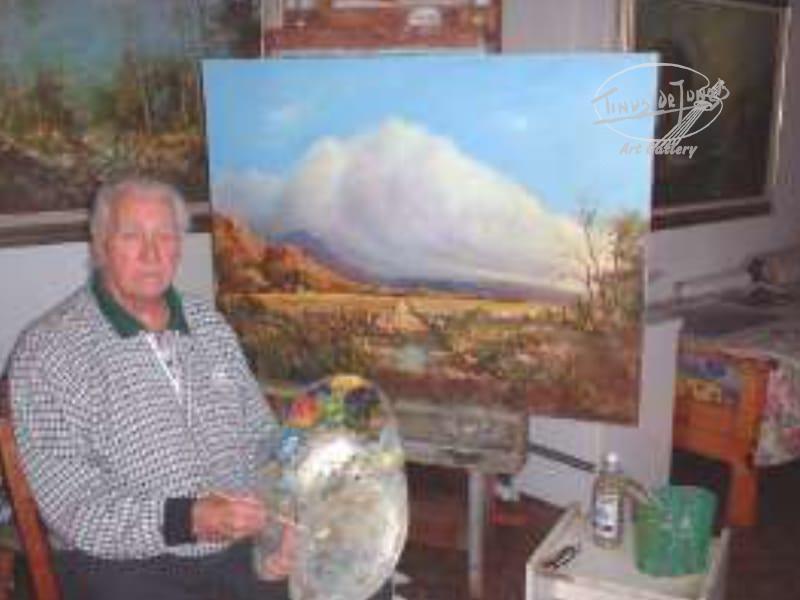 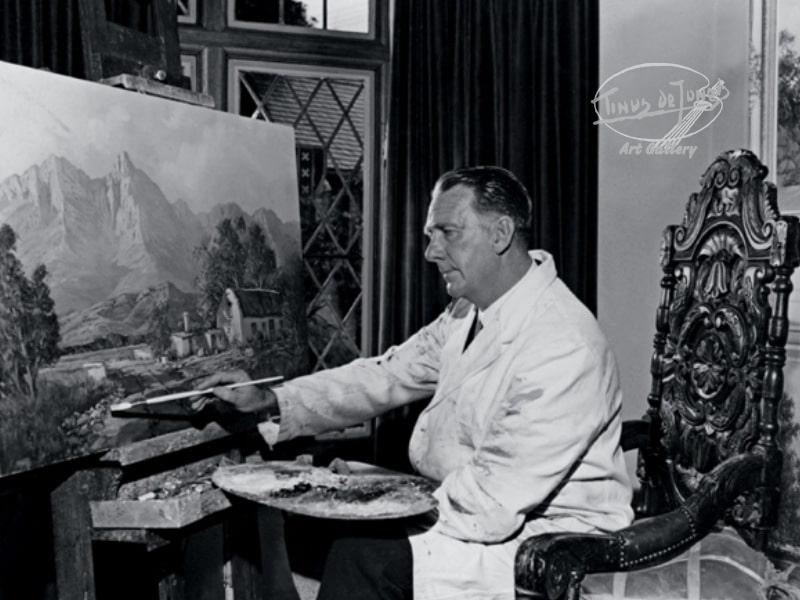 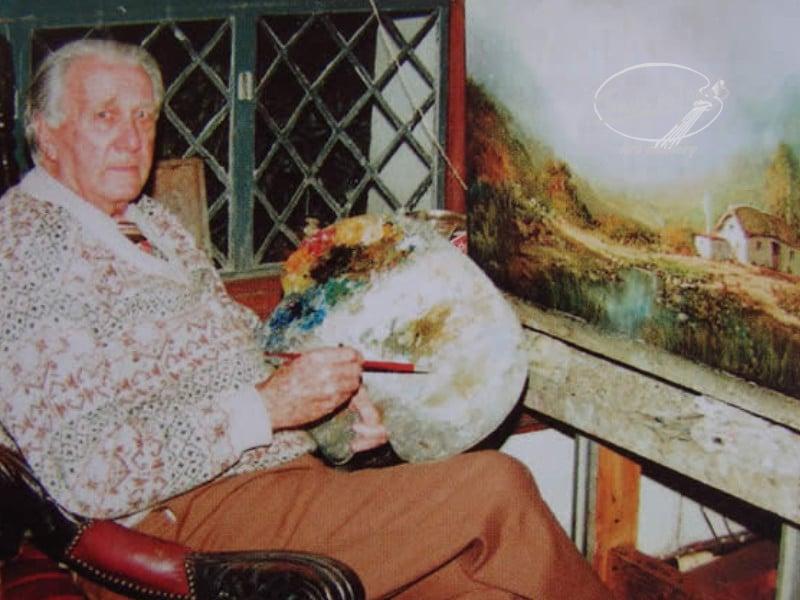 Embarking on a career

After matriculating in 1930 he embarked upon a career in commercial art. He spent a year studying watercolour techniques under his father’s supervision and then commenced his apprenticeship at the Cape Times. At the Cape Times, in addition to familiarisation with drawing, painting, layout, design and lettering in the art department, he attended the technical college for tuition in special techniques as a part-time student as well as the Michaelis School of Art where he studied woodcarving under H V Meyerowitz. Despite his crowded schedule, Gabriel spent every free moment in activity. Bearing in mind his father’s dictum that practical experience was the finest teacher, his lunch hours were spent sketching and painting small watercolours of such familiar city scenes as the Malay Quarter, Cape Town Docks and Table Mountain. Each evening he painted till midnight, depending upon his father for critique of the completed works.

On completion of his apprenticeship he entered into the field of colour reproduction of fine art in the recently established photo-lithography department. It was here that he accumulated his vast store of knowledge of the dissection and composition of colours. Gabriel continued to utilise his spare time in perfecting his watercolour technique, employing a freedom of application which his father admitted was beyond his capability. It was during this period that he also experimented with etchings but did not continue with them.

Weekends were free for leisure time pursuits and he was an enthusiastic sportsman, a keen golfer and excellent tennis player. When his father held an exhibition at the Riviera Hotel, Hermanus on 1937, he suggested that Gabriel display some works. The twenty watercolours met with a gratifying response and were sold within the first day. But it was not till 1939, after his resounding success at the Annual Exhibition of the Natal Society of Artists, that he was acknowledged as an artist worthy of note. His works were also displayed at the Annual Exhibition of the Eastern Province Society of Artists in Port Elizabeth which was very successful. Thereafter he exhibited regularly at the art societies of East London, Queenstown

and Orange Free State; the Langton and Pieter Wenning Galleries; and the S A Academy exhibitions in Johannesburg. He also exhibited in Bloemfontein and the 1946 exhibition of the Society of Artists. After his marriage to Mercia Maria Kotze in 1938, Gabriel established a home of his own in Rondebosch, adjacent to Tinus who visited him frequently, continuing to advise him on his art. 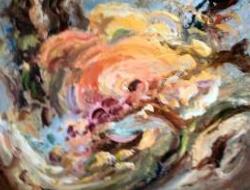 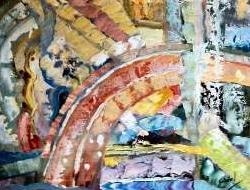 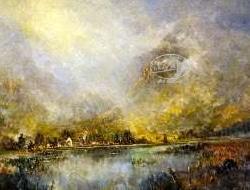 Two major events were to prove a watershed in Gabriel’s life, namely his father’s tragic death and World War 2.

On 6th September 1939 the Union of South Africa united with the Allies in declaring war on Germany. Gabriel volunteered for active service but was refused leave of absence by the Cape Times because of his expertise in the photo-lithography department. With his father he served in the Civil Defence Corps until 1942 when all Dutch citizens domiciled in South Africa were called up for service by the Dutch government.

After a year of failing health his father, Tinus, was found to be suffering from terminal lung cancer. Gabriel was granted compassionate leave to attend his father’s deathbed, thereby miraculously escaping death himself. The troopship transporting the Seventh Contingent, from which he was recalled, was torpedoed en route to Britain with a loss of all lives. During his vigil at his father’s bedside Gabriel pondered on the lamentable extinction of his father’s talent and vast store of knowledge. In a fitting tribute to his father he vowed to make optimal use of the foundation blocks which he had so generously provided, on which to build his artistic career.

On 17th July Tinus passed away. Immediately thereafter Gabriel was instructed to join the Eighth Contingent of the Koninklijke Nederlandsche Brigade, Prinses Irene and departed on the “Sabajak” on 20th November, arriving in Britain on 16th December 1942. Amidst preparations for the Allied Second Front he spent his free time sketching and painting watercolours of the English countryside, attending the Slade School of Art, which had been transferred to Windermere for the duration of the war, as a part-time student. On 5th August 1944 he departed for Arromanches, Normandy, with Fighting Unit 111, 49th Division attached to the 21st Army Group as part of the follow-up forces to expand the beachhead.

They advanced to the River Orne to take over from the 6th Airborne Division which had landed on D-Day, 6th June, and then continued on to Belgium. On 4th September they were transferred to the 1st Army Group as an army of occupation. They were directed to Holland as follow-up forces for Operation Market Garden. From 17th September till 7th October they held the bridge at Graves which, on 17th September had been gained by the US 82nd Airborne Division.

In the midst of the action, Gabriel still found time to sketch and paint many historical scenes of the Second Front. While standing guard at Wispic on 4th November he was injured by anti-personnel shells and hospitalised. Thereafter his active participation in the war was over. The Medical Commission graded him Medically unfit for duty and he was instructed to return home. He departed for Glasgow on the “Strathaird” on 22nd May 1945 and arrived in South Africa on 12th June.

He had suffered post traumatic stress, which was not readily understood in those days, and was never the same again. For his service Gabriel was awarded the Atlantic Star 1939-1945; Defence Medal 1939-1945; 1939-1945 Star; Army of Occupation Medal, Victory Medal, and the Oorlogsherinneringskruis met Gespen, Krijg te Land 1940-1945 and Normandie 1944.The Netherlands Military Mission granted him 30 days leave commencing 13 June after which he returned to work at the Cape Times.

Unsettled by the experiences of the past three years, Gabriel found difficulty in adjusting to the humdrum routine of civilian life and left to pursue art full time. During Tinus’ lifetime, Gabriel had only painted in water colours, perhaps an unconscious attempt to retain his identity while working in the shadow of his famous father. Now, for the first time, he directed his efforts at painting in oils.

At an exhibition at Maskew Miller’s Art Gallery, Cape Town which was opened by the Netherlands Consul General, Dr A L Wurfbain on 16 November 1945, he received encouraging favourable notices. 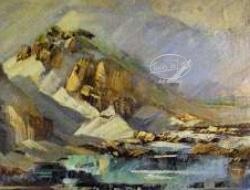 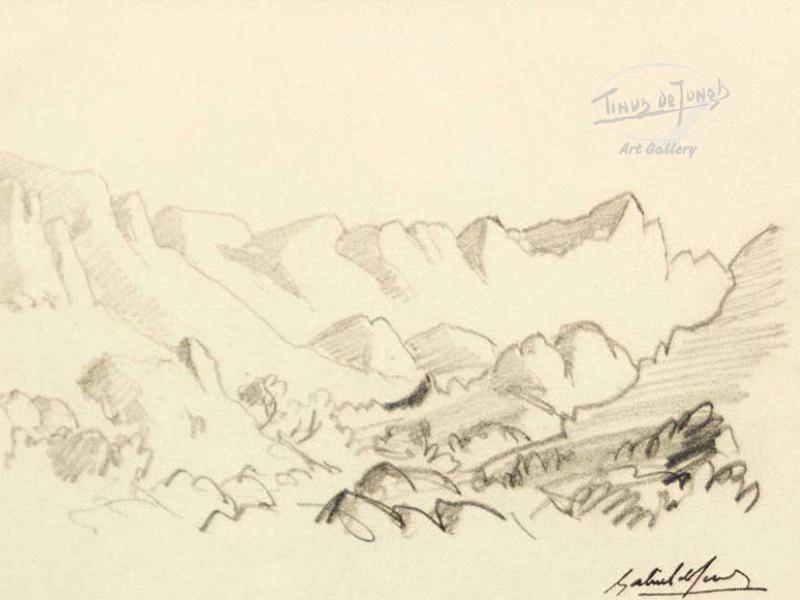 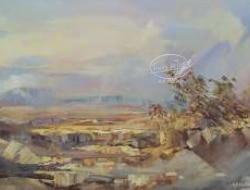 After the War – the development of his career in art

In 1946 he purchased a caravan built on the chassis of a three-ton army truck. With his wife and son (Tinus too) he set out on an extended painting tour of the Eastern Cape, Basutoland and Natal, in the process building up a store of subject knowledge.

During a lengthy stay at the Cathedral Peak Hotel in the Drakensberg the proprietor, Albert van der Riet encouraged him to hang his works on the premises. This proved instrumental in establishing his reputation as a painter in the oil medium. Gabriel was an experienced artist who handled his palette with an innate understanding of the technicalities involved in the use of light and colour.

Comprehensibly, after painting for some seventy years, his art manifested a pattern of development and growth.

The early works in oils revealed the influence of his father in the choice of subject matter, but differed in technique and application of perception. Where Tinus’ canvasses revealed his obsession with light/dark contrasts produced by the setting sun, Gabriel, no doubt due to his experience with water colours, preferred the

delicate tones and atmospheric blue of the Cape mountains. Tender blue peaks covered in transparent mist or solid giants bathed in light with dramatic clouds that writhe and swirl across the canvas, were his forte.

Despite his extensive tours of Britain, Europe, South America and East Africa he remained single-mindedly devoted to portraying the scenery of the Western Cape. His love of the sea led to his acquisition of the tuna craft, Pocketa, in which he travelled to the deep, past Cape Point. The varying moods of the sea, which sweep across his canvas, reveal his sensitive response to the imposing scenery off the False Bay Coast.

An important phase was initiated by Gabriel’s apprehension of two factors. To achieve light he had been employing the application of thick paint in light-filled hues with shadowed contrasts, thus drawing the eye of the viewer towards the solid texture of the paint on the canvas. But, looking directly into the sun, he observed that pure light is transparent and ethereal, without shadow and formless.

His resolve to capture that fugitive light culminated in delicately diffused compositions which he calls his “liquid light” paintings. With the passage of time his attitude towards landscape painting had undergone a subtle change. He maintained that, with the development of sophisticated photographic techniques, he no longer aspired to be a perceptual window on the world. Instead he cultivated an intensely personal vision, infusing his work with his emotional response to the transient moods of nature. No longer a mere recorder or nature, he had become involved in the act of creation itself. To him the most gratifying aspect of his approach was the feeling of empathy with the viewer who could now enter into the painting and explore his emotional response with the artist.

He went through a period during which he created an imaginative series of lyrical interpretations of musical compositions, among them The Swan of Tuonela by Sibelius; Fingal’s Cave by Mendelssohn; The Flying Dutchman by Wagner; and The Slave’s Chorus from Nabucco by Verdi. His series, Christmas Day; The Calming of the Sea of Galilee; The Crucifixion; The Road to Heaven; and Footprints were filled with religious symbolism, an outward manifestation of his inner search for meaning in life and death although essentially he was not a religious person at all.

Amongst the interesting painting commissions were

Boekenhoutfontein, the historic homestead of the president created, for the fifth anniversary of the republic for the Simon van der Stel Foundation in 1970 in order to raise funds for the restoration of the building

Landscapes for the launching of the first container ships, The Winterberg and The Helderberg.

Rare works that he executed were

The Volcanic Eruption on Tristan da Cuhna, 1963 for Mr Gaggins

Aftermath of the Floods, Laingsburg, 1981, donated to the Lion’s Club for fund-raising purposes

The Elephant Ndlulamithi, a 1,8 metre canvas donated to the Kruger National Park

He had been faced with the challenge of establishing a reputation as an artist worthy of recognition in his own right. He met that challenge with overwhelming success, for he needs no introduction to connoisseurs of South African art. His magnificent land and seascapes grace the walls of public buildings and private residences throughout the country. Indeed, his works are also sought after by international art collectors.Notable public figures, both national and international who own his works are: